Meet Blaire Bacher, class of 2003, a Research Scientist at Orion Genomics who, along with her collaborators, has two patents under her belt. Blaire’s original intent after getting her BS degree was to go to medical school. A stint providing patient care, however, convinced her otherwise. Instead, she began lab work with a newly established company, Orion Genomics, where she has been for the past nine years, with ever increasing responsibilities and opportunities.

Blaire admits her career plans have changed more than once – she chose Iowa State University because it offered another major of interest. During her first year she was housed on a Maple Hall floor with other life sciences majors, some taking genetics. An introductory course in the subject solidified that interest. From her vantage, she sees genetics as a growth area with new technologies constantly creating job opportunities in pharmaceuticals, medicine, agriculture, and academia. She cites her own company as an example of one taking advantage of the lower costs of Next-Gen sequencing both to develop genetic tests assessing risk for specific human cancers and to discover oil yield genes in oil palm. 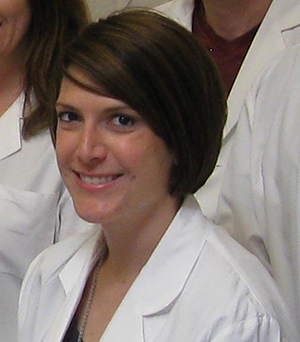 Like many life sciences majors, Blaire didn’t particularly enjoy the required chemistry courses. Now she applies concepts learned in general chemistry and biochemistry every day and has a better appreciation for their importance in her program of studies. Likewise, Blaire contributes data to and helps edit work written by her collaborators but feels that more writing intensive coursework would have better prepared her for primary authorship responsibilities. And as for career choices, she recommends using both the school years and intervening summers wisely – to try a “real life situation” such as research or patient care – “just talking to researchers or health care practitioners is not enough to know if that is what you really want to do”, she says.

While Blaire has carved out a great career with her Bachelors degree in Genetics, she considers herself fortunate to work for a company in which having a graduate degree is not a requirement for promotion. In Blaire’s experience there is ample opportunity to enter biotech jobs with a B.S. degree, but she cautions current students that such positions “usually don’t allow for a lot of autonomy or research leadership so I’d still recommend getting a graduate degree if you want to rise through the ranks in a research career”. And, she adds, “take advantage of networking such as using LinkedIn” to further your professional opportunities.